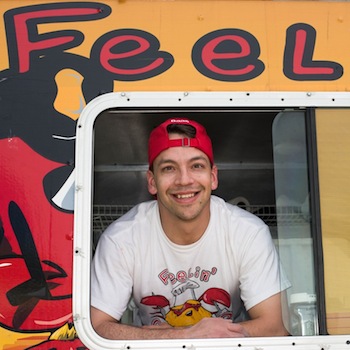 Chef Alex Tsamouras is a second generation food vendor on the streets of Washington, DC. His father owned several hot dog carts in the 1980’s.  Alex was born on the island of Lesvos, Greece and has always loved Mediterranean food and culture. Alex attended culinary school at Baltimore International College beginning in 2006 where he formalized his training.  After graduating is 2008, Alex worked as a saute cook at The Wine Market in Baltimore, MD.  Alex moved to Seattle, Washington to train under Tom Douglas, (James Beard award winner and winner of the Iron Chef) at Lola a hip downtown Seattle restaurant serving a fusion offering of Greek-inspired, Northwest cuisine.  He entered the food truck scene in Washington, DC in May of 2011 with his Feelin’ Crabby Food Truck.  Feelin’ Crabby was selected as the Official Food Truck of the Virgin Mobile FreeFest, won second place overall at the Taste of Two Cities in Baltimore, and received glowing reviews in the Washingtonian and Washington Post.  In 2012 Alex added a second Feelin’ Crabby truck and in 2013, he launched South Meets East with business partner Chef Justin Bates.